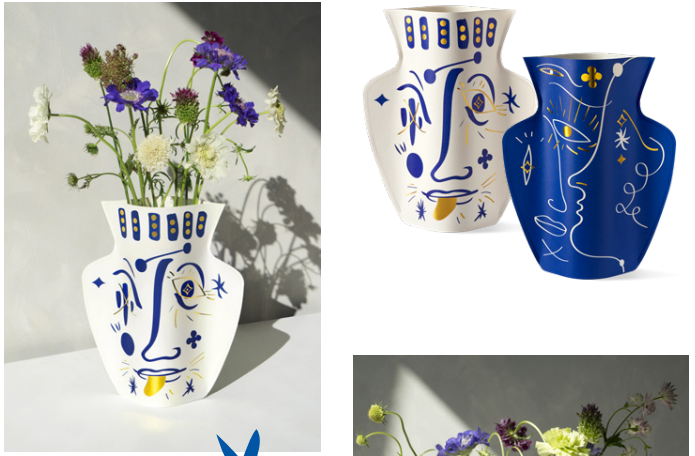 Octaevo and Hayon seem to be one of these winning formulas. The Barcelona based design company presents these days its first collaboration with the award-winning designer. The result is a capsule collection of paper vases that have already become a true decoration must-have.

Octaevo’s already iconic paper vase is reinterpreted by Jaime Hayon and adorned with his characteristic line illustrations. After years of mutual admiration, both firms join forces to carry out a collaboration, perfectly combining their iconic styles.

The chosen color range is using Octaevo’s signature shades white and blue, adding bold strokes of gold. Blue stands for the Mediterranean, which is a central theme of the brand.

A great source of inspiration is also ancient mythology, especially the Greek and Roman gods. It is, therefore, no surprise that Hayon’s faces match perfectly, creating a superb symbiosis of both firms.

Spanish artist and designer Jaime Hayon was born in Madrid in 1974. After founding Hayon Studio in 2001 and numerous solo exhibitions and shows at major galleries, design and art fairs worldwide, his work has spanned a wide range of firms and projects. Among them Cassina, Fritz Hansen, &Tradition and Magis; lighting accessories for Parachilna, Metalarte and Swarovski; and highly sophisticated objects for Bisazza, Lladró and Baccarat. He has also executed several interior design projects for prominent hotels, restaurants and museums.

His designs and works have been featured in the world’s most prestigious art and design publications. He has won numerous awards, including Elle Decoration International Design Awards. He has been included by Wallpaper magazine in the “Top 100” list and recognized as one of the most influential creators of the last decade. Also praised as a “visionary” and one of the most creative icons by Times magazine.

From their studio in the center of Barcelona, Octaevo creates thoughtful design objects for contemporary living that are 100% inspired by the Mediterranean. Each piece is made to be held close, designed to inspire and to brighten up your day-to-day.

Established in 2013 by Marcel Baer, the firm has already become a benchmark of decoration and product design.

Swiss born with Spanish roots, graphic designer and creative director Baer founded the brand inspired by his childhood memories. The family album and cherished moments found in photographs and Super 8 movies of his family’s voyages in the 60s along the Mediterranean coast, as well as the stories told by his father who worked at high seas, define the aesthetic universe of Octaevo.

Today, Baer seeks in each piece the perfect balance between the latest technology and traditional craftsmanship. With hundreds of points of sale throughout the world, Octaevo is taking part in the most prominent fairs each season and enjoys the favor of the national and international press.